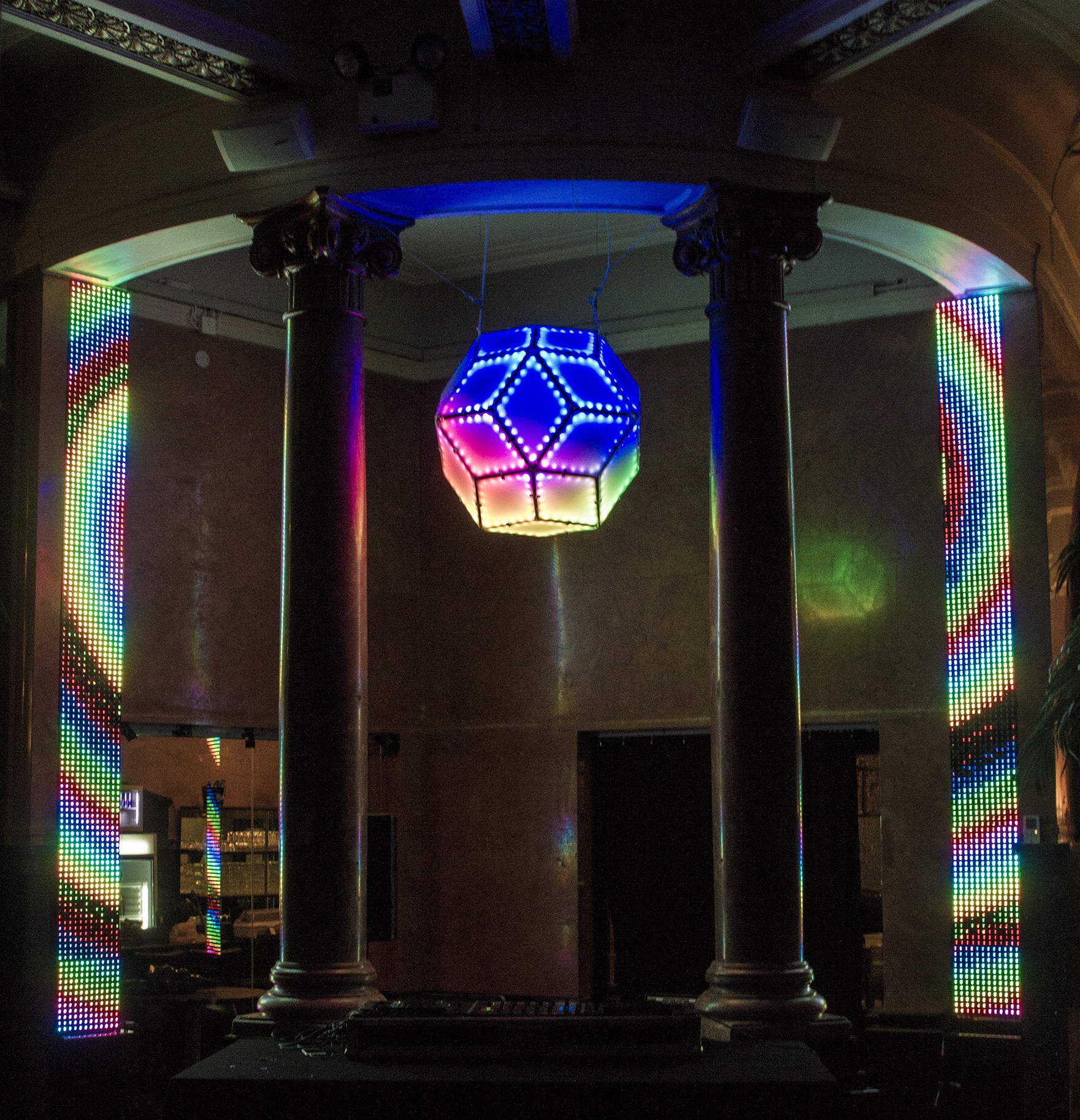 Plastics, aluminium, screws and bolts. 720pixel LED lights, and six transducer speakers. All tediously put together as a rhomic tricontahedron, by hand by Birk Nygaard.

The light was mapped out in such a way that an augmented lighting of the shape, animated for ilde movements and interactively controlled by a Leap Motion. Programming was done for different intents and purposes through Vuo, VDMX, Millumin and Mad Mapper.

In the process of constructing this sculpture I discovered the renowned thinker, arcitect and inventor Richard Buckminster (Bucky) Fuller, and after reading his biography I decided to dedicate the piece to this adventurous man.

Fuller said that he had experienced a profound incident which would provide direction and purpose for his life. He felt as though he was suspended several feet above the ground enclosed in a white sphere of light.

A voice spoke directly to Fuller, and declared:

“From now on you need never await temporal attestation to your thought. You think the truth.
You do not have the right to eliminate yourself.
You do not belong to you. You belong to Universe.
Your significance will remain forever obscure to you, but you may assume that you are fulfilling your role if you apply yourself to converting your experiences to the highest advantage of others.” 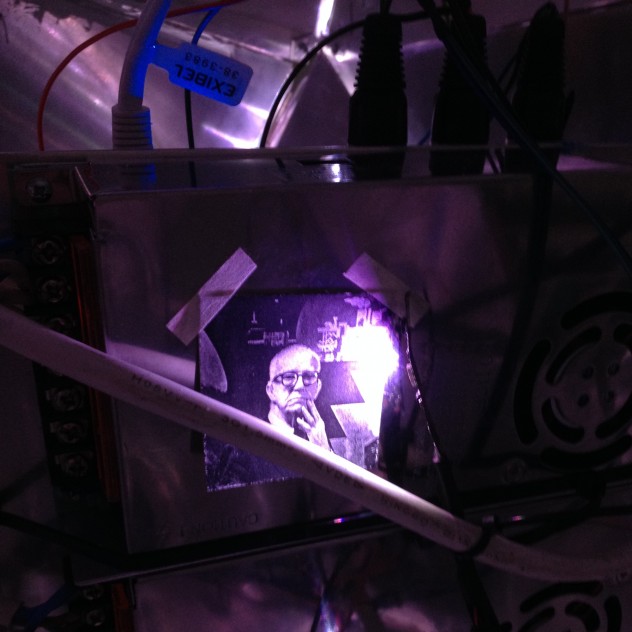 As a hommage to Buckminster Fuller I have placed a little “shrine” with its own little light inside the shell of the construction. Here Bucky can rest in perfect geodesic safety. 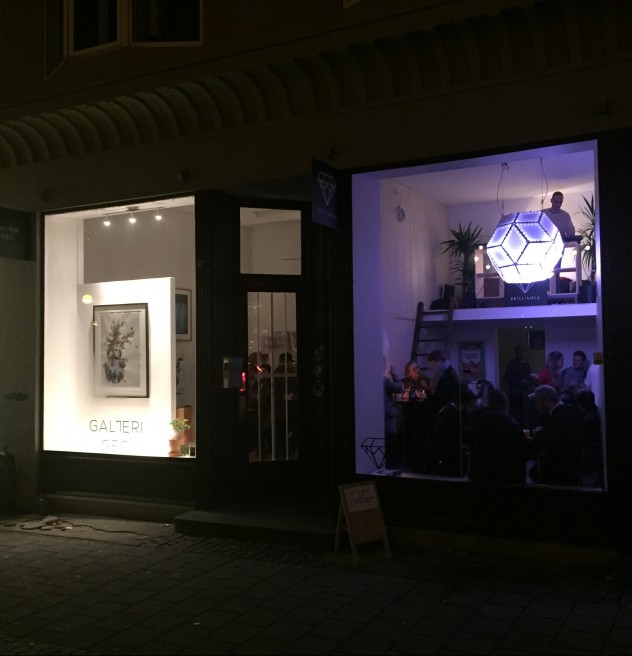 On tour in Bergen

The installation was first shown during the Raff Designweek in Bergen, as a work in progress at “Robotbutikken”. Here students and other audience was invited to try an experience the differents functions of the installation. With full interactivity and sound, but with out its outer plastic layer. The sound was a remix generation loop of Röyksopps “Monument”, put toghether by the local talents in Atella. A massive soundtrack made from the full stems that makes up the well known song by Röyksopp. Saxophone, beats, ambience and vocal, mixed with recordings of the actual material that the exciter speakers was made of.

Later the installation was first excibited in the foaje of Bergen Kunsthall. This was a an intended spot for the installation. In the midle of a oval white stone room, both the acoustics and light ambience was perfect.

For the opening I invited guitar player Stephan Meidell to interpret the piece. Plugged in to the installation he demonstrated how the piece could act as a stage for live performances. Tweaking and panning guitar sounds around the room for the audience.

After this the installation has travelled around the city. Through shops, restaurants, parties and exhibitions it has become well known in Bergen City. Right now it hangs in the window og Brilliance Music company, and can be experienced in it full interactivity there. Christian Michelsens gate 7, 5012 Bergen

At Landmark/Bergen Kunsthall the installation was very visible from both the galleries and from the cafeteria. At night it also lit up the foaje with millions of colors and could be seen from far away trough the windows of the fasade. 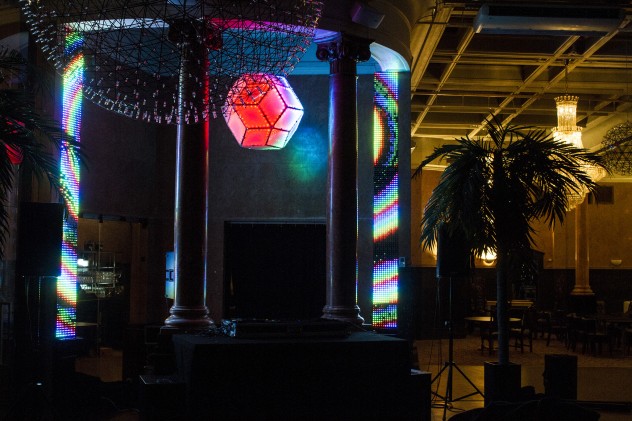 For Newyears 2015-16 I installed Bucky in the old bank “Bankorotto”. Here the installation had company by som LED-screens.

At the restaurant Lysverket in Bergen we got the idea to install the lamp in the kitchen while it was closed for christmas. It was central in the New Years celebration 2014-15. Animation was made customary for the occation.

From the construction fase at Bergen Senter for Elektronisk Kunst (BEK) 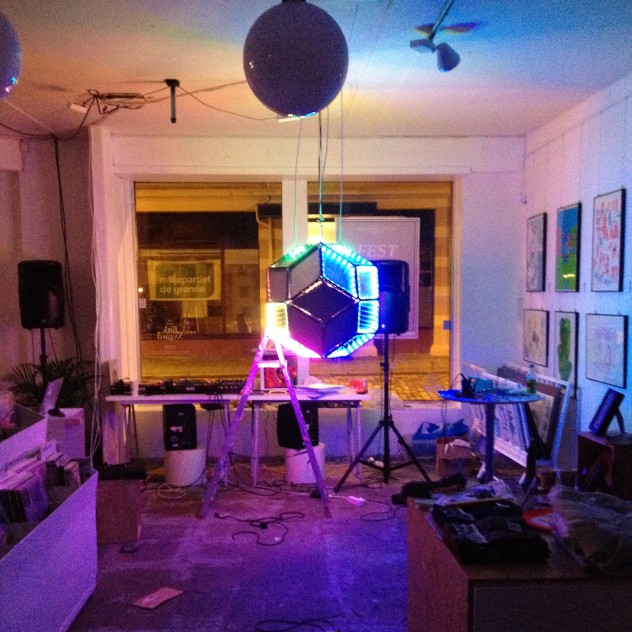